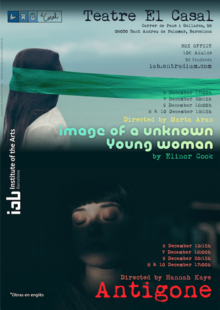 Institute of the Arts Barcelona

The action of “Antigone” follows on from the Theban civil war, in which the two brothers, Eteocles and Polynices, died fighting each other for the throne of Thebes after Eteocles had refused to give up the crown to his brother as their father Oedipus had prescribed. Creon, the new ruler of Thebes, has declared that Eteocles is to be honoured and Polynices is to be disgraced by leaving his body unburied on the battlefield (a harsh and shameful punishment at the time).

Image of a unknown young woman

As a video goes viral, a revolution begins to stir.  Ali and Leyla are panicking – they uploaded the footage and now the authorities are after them. Across town, Yasmin is desperate to know if her missing mother is still alive. Halfway around the world, a woman in London wants to help. As a tornado of dissent and violence spreads, everyone’s life is going to change.

Institute of the Arts Barcelona